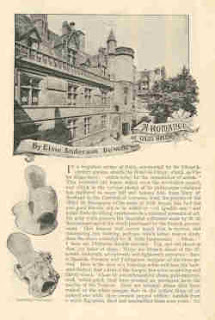 In a forgotten corner of Paris, surrounded by its fifteenth century garden, stand the Hotel de Cluny, which as Victor Hugo says: "exists today for the consolation of artists." This beautiful old house, which even the revolution spared. This famous roof covers much that is curious and interesting, but nothing, perhaps, which better repays study than the shoes collected by M. Jules Jacquemart.
The unique and splendid collection was made my M. Jacqumart during thirty years of ceaseless searching. it has now attained a world-wide celebrity and nowhere else can the student of archaeology find more precious information. Here are the sixteenth-century pattens from Venice, of white leather so finely cut that it resembles guipure lace. Another Venetian shoe is white with tufts of rose still studding it. I think the principal significance it has for nineteenth-century eyes is its great utility to a gouty owner and its superiority in comfort over red flannel and a supporting chair. 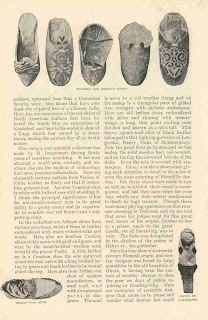 In the collection are African shoes from various provinces, most of them in leather embroidered with many-colored silks and wools. Here also are heelless Turkish shoes richly sewn with gold and gems, and nearby the hand-knitted woolen sock worn by the poorer Turks. A little farther on is a Croatian shoe, the sole upturned about the foot, and with a long braided lacing in green and black leather to be wound about the leg. Here also is an Indian war shoe of ancient manufacture, in steel mail, and with an upturned point of shagreen. The main is sewn to a red woolen lining and on the instep is a triangular piece of gilded iron wrought with delicate arabesques. Here are old Indian shoes embroidered with insects' wings, a long, thin point curling over the foot known as a rat's tail. This heavy, square toed shoe of black leather belonged to that fighting governor of Languedoc, Henry, Duke of Montmorency. Note the great fleur-de-lis stamped on the instep, the solid wooden heel, red covered, and on the flap the entwined initials of the duke. Even the sole is covered with arabesques. Fancy a modern shoemaker giving such attention to detail in the soles of even the most exacting of Piccadilly dandies! But these shoes were made to last as well as to exhibit their owner's consequence, and last they have since the year 1632, which saw the wearer condemned to death for high treason. Though there were many pitying spectators on that summer morning in Toulouse, and we are told that even his judges wept for this great lord, baron of the empire, brother-in-law to a prince, uncle to the great Conde, yet all lamenting was in vain. The duke was decapitated in the shadow of the statue of Henry IV., his godfather.
Here is a tiny shoe of sixteenth-century Flemish origin, and similar footgear was found in large quantities in the old hospitals of Ghent, it having been the custom of wealthy citizens to shoe the poor on days of public rejoicing or thanksgiving. here are examples of eccentric footgear that cause us to pause and wonder what human feet could have squeezed themselves into such agonizing forms. But these shoes were never made for actual wear. They are samples of workmanship turned out by some fifteenth-century youth desirous of placing himself as apprentice, and submitting to his future master these evidences of his skill. One of the most curious shoes in the collection is a pale silk brocade affair of the time of Henry II. the long, slender point is covered with a tip of gilded and engraved metal and on the instep is a large rosette of lace.
Here is a shoe which belonged to no less a person than Catherine de Medici, mother of three kings. It is easy to imagine that these very pieces of skilled workmanship clothed her slim Italian feet as she paced the Amboise terrace more than three centuries ago, weaving the web that later closed about the victims of Saint Bartholomew. 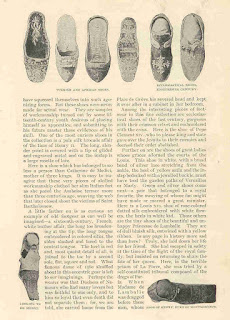 The most recent acquisition of the Hotel de Cluny is a pair of slippers once the property of Madame de Pompadour, that royal favorite who, summing up her life, said: "I fancy I am reading some fairytale; my life is an impossible romance; I do not believe a word of it." In the gallery of the Louvre hangs her portrait in pastel. In it she is represented as wearing a flowing, flowered, brocaded gown, open at the throat, and she is shod with these very shoes at Cluny. they are of yellow dotted silk and, be it whispered, not uncommonly small. the head in the portrait is perfectly poised and in every feature is an air of nobility and dignity which belies the records of Versailles. For twenty four years she played her role without an hour's respite, and when she made her final exit the king, standing at one of the palace windows watching the rain pouring in torrents, said with a mocking smile to the courtiers about him: "The marquise has a bad day for her journey, gentlemen."