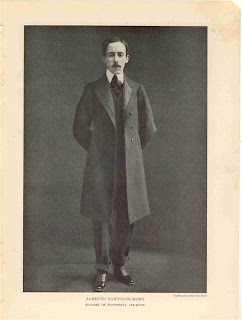 Thirteen years ago, Alberto Santos-Dumont left his father's coffee plantation in the valley of the Rio Mogy Guassu, Brazil, an unknown lad.  Last year on a visit to his native land he was met by war-ships, given railroad passes all over Brazil, and applauded wherever he went as the foremost inventor and practical air-ship builder in the world.  He is thirty-one years old, five feet five inches in height, with dark hair and eyes, a slight well-knit figure, and is quick, but not nervous, in all his movements.
When a student of the mining-school at Minas, he spent his vacations taking care of the engines on sixty miles of his father's private railroad, riding over every foot of the line in their cabs, and attending to repairs when necessary.  Thus he learned practical mechanics.  He then went abroad, climbed mountains in Switzerland, and was one of the first to take seriously to automobiling, experimented with kites and hot-air balloons, and studied aeronautics in France, the school of that subject.

The highest balloon ascension ever made was 28,000 feet; Santos-Dumont went up 23,000 feet.  Beyond that height the rarefied air causes bleeding of the nose, mouth, ears, and eyes.  Frequently he ascended to 20,000 feet.  Finally, however, he devoted himself to the development of the air-ship.

In previous experiments, the engine for propulsion was disproportionately heavy as compared with the lifting power of the balloon proper; present electric batteries are impossible because of their weight.  When Santos-Dumont advanced the idea of Petroleum, he was laughed to scorn by balloonists, who maintained that he could not prevent fire and explosion.  In 1897, he made his ascension, and the petroleum was found to decrease in weight as it was burned, at the rate of one pound an hour.  Number 7, his seventh air-ship, carries between 200 and 300 pounds, uses fifty pounds of petroleum an hour, and develops sixty-horse-power, which can be pushed to seventy.  The 200 or 300 pounds are exclusive of the bridge-like frame, two-thirds as long as the cigar shaped balloon, and built in angles with flat sides down.  This invention of Santos-Dumont distributes the weight while keeping the balloon in shape.  he seats himself comparatively near to the rudder in the long frame, managing twenty different ropes and two delicate metallic valves in a boiler.  Since the "engine-room" is swung forward (below) the frame, or backward, to assist the rising or descending flight of the air-ship.

No. 9, his "runabout," which he exhibited at the races in France last summer, has its engine-room near his seat in the main frame.  In this he is not able to take up with him more than the weight of a child, but No. 7 will carry three or four persons.  The construction of the latter took more than five years, and cost between $30,000 and $40,000.  its total weight is 3,000 pounds, and it is 180 feet long.  Santos-Dumont has not yet attempted to rise above 1,000 feet, because higher up the air-currents are more numerous and treacherous.  His longest flight took two hours.

"As I take this for an amusement," he once said to me, "why should I stay up longer, or choose anything but a clear day for an ascension, or go to a greater height? I do not carry with me a parachute, nor a small emergency balloon; they would be in the way, and besides, one must have no sense of fear to do what I am doing.  Once when I was flying over Paris, a rope running from the long frame of the 'engine-room,' suspended, got caught in the pulley, fortunately in the long frame, not in the 'engine-room,'  I walked along the frame, which is about three inches wide, sideways, leaned down, fixed the pulley, and got back to my seat in four or five minutes.  How high was I then?  Oh! about a thousand feet, but I held onto the braces.  If anything happens to my engines, I am a balloonist, and, therefore, in a similar predicament to a sea captain whose ship has lost its propellers or broken its engines.  He must hoist the sails or be at the mercy of the elements.  The valves at the end of the balloon regulate the effect of the temperature upon the gas.  If I have difficulty in rising quickly, I throw over some ballast, or let out water from the 'engine-room.'

"I have demonstrated that the air-ship can be controlled, and I believe that in five, ten, fifteen, or fifty years it will be commonly sailed.  Its importance in warfare is acknowledged.  Already England has one attached to the military headquarters at Aldershot, with which interesting experiments have been made.  Personally, I own four air-ships - in time of war at the service of the French Government."

Although he continues to invent improvements of vital importance, Santos-Dumont has not taken out a patent in any country, nor does he intend to.  A man of great wealth and public spirit, he gives his inventions to the world.

Written by Charles Hall Garrett.
Originally published in The World's Work Magazine, May 1904.